Thresia Chiramel Mankidiyan was born in Puthenchira in Irinjalakuda, Thrissur district on April 26, 1876 as the third of five children of Thoma and Thanda and was later baptized on May 3, 1876 at the church of Saint Mary. She was named ‘Thresia’ in honor of Teresa of Ávila. Her paternal uncle Antony Chiramel Mankidiyan was her godfather, and his wife Anna was the godmother.

Her mother died on March 2,1888 after blessing her children who had gathered at her deathbed. Her mother’s death put an end to her studies and she dedicated herself to contemplation in her local parish church. In 1886, she made a private vow to remain chaste. She could rightly be called a social reformer. Mother Mariam Thresia founded a Religious Order with three friends, who took care of the poor and the needy. There was a great deal of objection to their work in the beginning, but they persevered. They focused on the integration and wellbeing of families, mainly, poor suffering families. Since 1904, she desired to be called “Mariam” because it was claimed that she had a vision from the Blessed Virgin Mary in which she was instructed to add it to her name.

She endured many sorrows, pains and hardships with surprising equanimity. She was consoled by celestial visions, especially those of the Holy Family, when she was tortured by the devil with trials and tribulations. From 1902 to 1905, under the orders of the local bishop, she was subjected to several exorcisms by Fr. Joseph Vithayathil who, later, became her spiritual director. In 1903, she requested John Menachery – the Archbishop of Thrissur – to build a house of retreat, but the request was turned down. This happened after she had formed a group with three other friends (Mariam, daughter of Varunny and Rosa Karumalikkal, Kochumariam, daughter of Ittiera and Acharu Maliekal Koonan, and Thanda, daughter of Kunjuvaried and Thresia Maliekal Koonan) who were with her during the day time for prayers and apostolic activities among poor families. In 1913, she set up a house at Puthenchira and on May 14, 1914 founded the Congregation of the Holy Family to which she was professed in, and vested in its habit. She was the first superior of the order.

On June 8, 1926, she uttered, “Jesus, Mary and Joseph, I give you my heart and my soul,” and closed her eyes and died. On the morning of her death, she was laid on the floor on a mat per her wish. Her spiritual director and fellow religious huddled around her. Her funeral was celebrated on June 9, the next day, and in accordance with her wishes, her remains were not washed prior to her funeral.

“Jesus, Mary and Joseph, I give you my heart and my soul.” 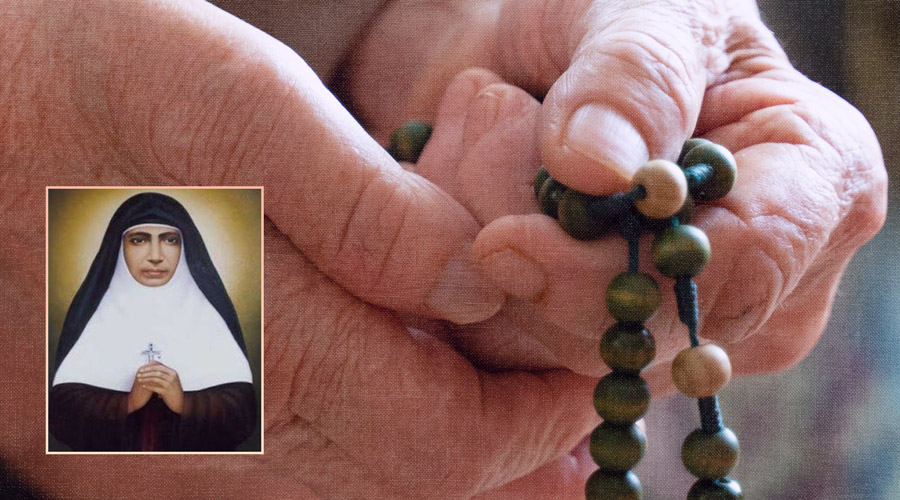 The beatification process opened in Irinjalakuda on July 12, 1982 after the Congregation for the Causes of Saints (C.C.S.) titled her as a Servant of God and issued the official “nihil obstat” (nothing against) to the cause while the cognitional process opened on May 14,1983 and concluded its business on September 24,1983; the C.C.S. later validated the process after its conclusion in Rome on November 8, 1985 and received the Positio dossier from the postulation a decade later in 1997.Pope John Paul II named the late religious as Venerable on June 28, 1999 after he confirmed that she had lived a life of heroic virtue. The investigation of the miracle required for beatification was held in the Thrissur Eparchy from April 28,1992 to July 26, 1993 and was validated onJanuary 22, 1999 before receiving the approval of the medical board on November 16, 1999.

The first miracle was that of the cure of Mr. Mathew D. Pellissery, who was born in 1956 with congenital clubfoot. He could only walk on the sides of his feet until he was fourteen, that too, with great difficulty. After 33 days of fasting and prayer by the whole family, invoking the help of Mariam Thresia, his right foot was straightened during sleep on the night of August 21, 1970. Similarly, after 39 days of fasting and prayer, his left foot was also straightened overnight during sleep on August 28, 1971. Since then, Mathew has been able to walk normally. This double healing was declared inexplicable in terms of medical science by as many as nine doctors in India and Italy and, thus, met the last canonical requirement for her beatification. It was declared a miracle obtained through the intercession of Mariam Thresia by the C.C.S. on January 18, 2000 before the Pope himself issued final approval on it on January 27, 2000. John Paul II beatified Mariam Thresia on April 8, 2000 in Saint Peter’s Square. Mathew Pellissery was present there during the beatification ceremony at St. Peter’s Square.

The second miracle was the healing of baby Christopher in 2009. He was born with underdeveloped lungs and three holes in his heart! When he began experiencing respiratory failure, doctors gave up hope on his life. Christopher’s grandmother brought a relic of Blessed Mariam Thresia from her home to the hospital to place beside him, and the family prayed for her intercession; and to everyone’s dismay, he was healed! The miraculous healing of the child Christopher received approval from the medical board in Rome in March 2018 and theologians, later, confirmed it in October 2018. Pope Francis approved this miracle on February 12, 2019, which cleared her for canonization; it was celebrated on October 13, 2019.

St. Mariam Thresia was a woman of vision, who foresaw the potential of women and the need for their education. Her compassionate heart was moved by the pathetic situations in the families and she decided to do all that she could to save the suffering souls as much as possible.

She was a woman of courage who fought against the prejudices of her time to follow the call of Christ after the model of the Family of Jesus.

Finally, she was a woman of prayer whose deepest longings found fulfillment in God!