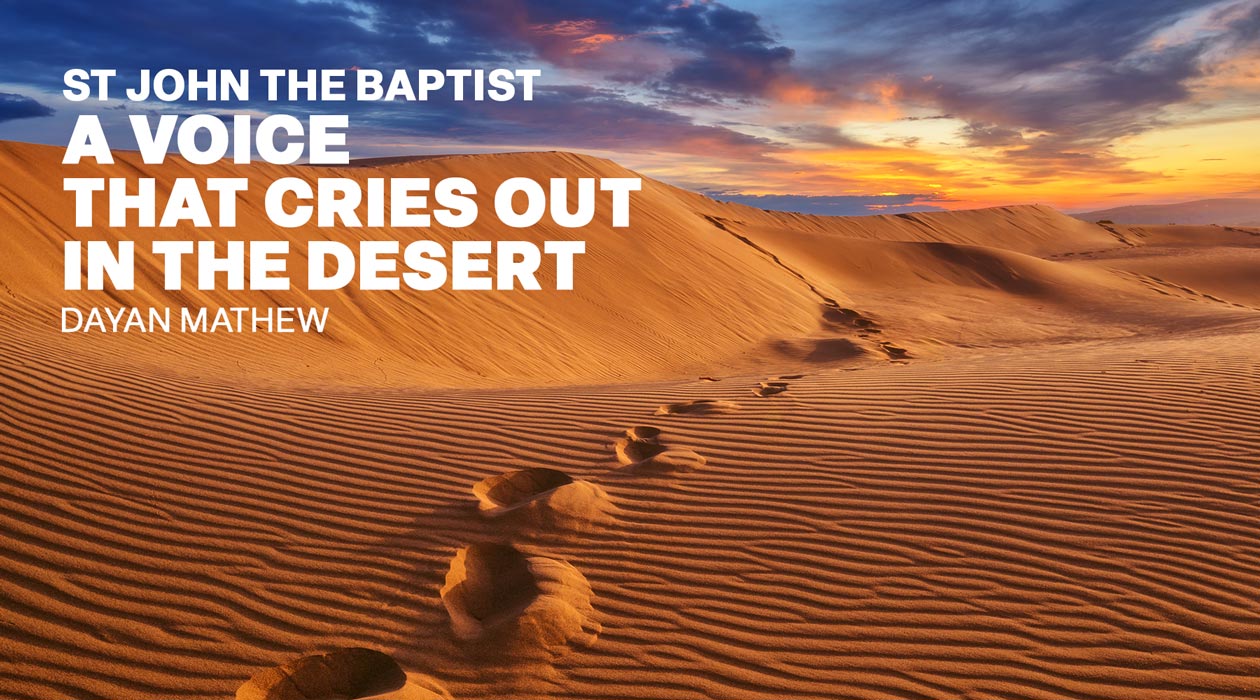 As we enter this new year, we embrace the liturgical season of Denha or the Season of Epiphany. We celebrate the feast of (Denha) Baptism of Jesus Christ as the central premise of this season. Being known for his prophetic acts and conversion of people through baptism, St John the Baptist is blessed with the grace to baptize Jesus and bear witness to the divine presence of God the Father and the Holy Spirit at the auspices occasion of His baptism. St John the Baptist seems to have had a fascinating character throughout his story in the bible. In all four Gospels, there’s a significant mention of John the Baptist, revealing his importance during that time. St John the Baptist’s story had started even earlier, when Isaiah prophesied about him 7000 years before his birth. “A voice cries out: In the desert prepare the way of the LORD! Make straight in the wasteland a highway for our God!” (Isaiah 40:3) Another prophecy we can read about St. John the Baptist is in the book of Malachi: “Lo, I am sending my messenger to prepare the way before me, And suddenly there will come to the temple the LORD whom you seek, And the messenger of the covenant whom you desire. Yes, he is coming, says the LORD of hosts.” (Malachi 3:1)

A voice cries out: In the desert prepare the way of the LORD! Make straight in the wasteland a highway for our God!

St. John the Baptist is the Lord’s direct forerunner, sent to prepare his path. John is the last of the prophets and is referred to as the “Prophet of the Most High.” He introduces the gospel, cheers the arrival of Christ in his mother’s womb, and takes pleasure in being “the friend of the bridegroom,” whom he describes as “the Lamb of God, who wipes away the sin of the world.” As followers of Christ, St John the Baptist exhorts us to embrace the attitude of self denial and shows it in his own words and actions: “He Must Become Greater, I Must Become Less.” (John 3:30) John would have really undermined the goal and intention of all the years he had spent working for this moment, if he had clung to his ego, attempted to maintain his own following, or grabbed a small portion of the fame for himself. It was, indeed, time for Jesus to grow, and for John to shrink.

One of the most fascinating things we can notice about John the Baptist is that he is Elijah, who was to come before the arrival of the Messiah. We can draw many parallelisms in the lives of Elijah and St John the Baptist, from how they dressed, what they ate, and how they both prophesied. They both dressed in animal skin, ate wild foods, and preached to the people of Judea to repent. Even more intriguing is how Elijah was last seen in the bible by the river Jordan before being taken up by God (2 Kings 2: 7,8), the same place where we can see St John the Baptist (near river Jordan) baptizing people with water (John 1:28). Though John the Baptist himself denied being Elijah when asked if he is, Jesus confirms that St. John the Baptist is Elijah when he says, “He is Elijah who is to come.” (Matt 11:14) John testifies to Christ through his preaching, in his Baptism, and his martyrdom, coming before Jesus “in the spirit and strength of Elijah.” Let us remember our Baptismal vows and seek the intercession of St. John the Baptist to help fulfill those, as we live our Spiritual Journey in Christ.